One of the joys of indie publishing is all the options a writer has. I can write in any genre, I control my IP, I can tell off-center stories, I can write to a niche, I can mash up genres in ways a publishing house would scoff at. (Kind of like mashing the paranormal mystery with a legal thriller!)

And last, but certainly not least, is the option to collaborate. With anybody and everybody. In the traditional publishing world, collaborations come with so much red tape they're nearly impossible to make into a reality. But with indie publishing, it's incredibly easy.

And I've had such a blast writing the Tomahawk & Saber series with Nathanael Green, that I figured, why the hell not collaborate with another good friend?

Enter my buddy, Jann Gott. It's because of him I get to say I'm working on an Irish mob story right now. (Never thought I'd say that!)

Our novel is called The Board, and it's a cross between The Wolf of Wall Street, Rounders, and The Departed.

We can't wait to put this book out because in our not so humble opinions it kicks all f--king ass. But more on that in the near future, for now I want to introduce Jann Gott. He took time off from coming up with all these great ideas to answer my questions, which range from half-witted to ridiculous to piercing. (Okay, not piercing.) Here's the Q&A:

Q: Jann, where did you get your idea for The Board?


A: I have been in business management and consulting for decades now.  Moreover, I have been a fan of mob stories and mob movies ever since I was a teenager. Being a fan of both business and mob stories, I thought it would be interesting to put an intelligent and resourceful c-suite consultant in a situation where he has to help the mob or else. There are parallels in both business and the mob, family and business loyalty, hard work, spinning the truth to get your bottom-line, maximizing profit, and dealing with your competition. I readily admit that I can be cynical, but I have often thought that both the business and the mob attempt to crush their competition and the only difference between the two is corporations use mergers, acquisitions, and firings. The mob uses a gun.

Q: Rumor has it there's a script for The Board floating around somewhere. True?


A: Very true, and you already know that! We started developing the script and outline first. We decided that this would also make a terrific book. I am big admirer of your work and have been for sometime now especially The Unearthed series and Close of Business books. So I jumped at the chance to collaborate and develop the book and the screenplay in parallel.

Q: For the record, I did not pay you for the plug...but getting back to you, Jann. You're an idea factory. Not more than five minutes goes by where you're not pitching a new idea to me. So tell us about all the other stories you've got planned.


A: I appreciate the compliment. The problem with having so many ideas is staying focused on the one story you have in front of you and not having enough hours in the day to bring all the good ideas to fruition. Other stories we are developing are:


·       a popular Presidential candidate that may also be a sociopath


·       Myrtle Beach buddy story involving 3 high-school best friends that get together after 20 years for a wild weekend golf trip filled with non-stop drinking, partying, dirty words, stupidity, strippers, golf, and coming to terms with the death of one of the friend’s father


·       Curling – Executives that find themselves out of work, unable to land the next c-suite position, and decide to try out as a Curling team in the Winter Olympics


A: Boxers – keeps all my best ideas flowing

Q: List your favorite movies (you only get to pick 3).


A: Tough question but probably no surprise given my earlier comment on the Mob

Q: Did you ever think you'd be a published author?


A: Never in a million years. I think I read as many books as I have written.

Q: After The Board, what's the next book going to be?


A: I want to start exploring the Presidential candidate story with you.

Q: Be careful what you wish for...The Board started out as a screenplay. I've struggled trying to translate what was supposed to be a film into a book. What challenges have you faced?


A: I understand that struggle very well. The blessing I have is that I am a very visual person (visual learner) and find myself able to translate the scene in my head as if it were playing right in front of me on screen. That is a curse however, since the meatier background story needs to find a home in the book.


In a screenplay or movie, you can write in flashbacks or cuts to quickly probe into the history of the character, what makes the characters tick, and how the characters may react to a situation based on the quick flashback. A book tends to be more chronological or linear to capture the inner workings of the characters. A movie like Pulp Fiction, which jumps backwards and forwards brilliantly on film, might lose the reader if the book was laid out along the same time line. I can imagine the reader saying, “Hey Vincent was shot two chapters ago. What is he doing in the diner during the robbery at the end of the book?”

Q: Here's where it gets difficult. Pete Rose: in or out of the Hall of Fame?


A: Dude, Pete Rose was my hero growing up. Nobody played harder and nobody wanted to win more than Pete. My hometown Phillies would not have won the 1980 World Series without Pete Rose.

The problem: he is not likable any more. He was not a good manager for the Reds and clearly fell into a gambling problem and did bet on his own games. Gambling is an addiction and addiction is a disease so I have empathy – I do for my childhood hero. There are also a lot of Hall of Famers with probably worse personal problems however, Pete broke the rules and continues to be a dick about it so ultimately, I say no to the Hall of Fame.

Well that's all the time we have for now. As we get closer to the launch of The Board, I'm hoping Jann will make a few more appearances on the blog here. It's awesome I've gotten this opportunity to work with him and can't wait to see how the book fares once we release it into the publishing wild.
Posted by Evan Ronan at 7:25 PM 4 comments: 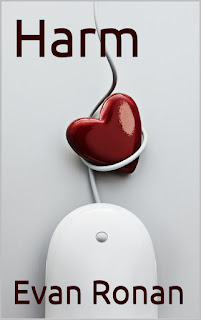 I'm working on getting Frontier Justice free on Amazon and elsewhere too.

I plan to make In The Blood (maybe the first two installments) free as well, as soon as my period of exclusivity with Kindle Unlimited ends.

Why all the free stories?

Well, readers have enjoyed my shorts but they don't buy them. This is not surprising to me because as an avid reader myself, I'm the same way: I much prefer novels and rarely plunk cash down on a short. For me it's a no-brainer. I can spend a buck on story I'll read in twenty minutes, or I can spend five bucks on a story that will give me hours of entertainment. 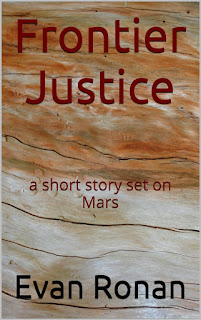 So why not just offer these stories for free and get more people reading my stuff? Win-win, if you ask me.

You can help make Frontier Justice free on Amazon by reporting a lower price. (There's a button on all book pages to do this).

And keep an eye out for more free offers in the near future. I'm toying with making The Unearthed free for awhile to see if it brings more readers into the series. We shall see.

Enter to win a FREE AUTOGRAPHED COPY of Language of the Bear!!!!!! 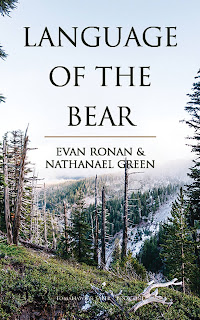 Nate and I are running a giveaways contest over on Goodreads right now. We will be sending out FIVE FREE AUTOGRAPHED COPIES of Language of the Bear, the first in our historical series set in Pennsylvania in the days of the French and Indian War.

This is all leading up to the release of the second book in the series, Through the Narrows. That one is with our editors now and will be out very soon (as in, this month). I haven't talked too much about Through the Narrows yet, so here's a teaser:

In the second book of the Tomahawk & Saber series, Wolf Tongue and Pyke find themselves defending a less-than-deserving small town on the Pennsylvania frontier against a vastly superior force of Mingos who are out for blood.

If you're a fan of history, adventure, and good old-fashioned character-driven action stories, then you should check these books out. They're fast, fun, violent, and at times brutal.
Posted by Evan Ronan at 10:43 AM No comments:

I try to keep my newletters short (you're busy), infrequent (is there anything more annoying than a daily group email?), and not salesy (you didn't sign up to constantly get pitched).

But if that doesn't get you clicking, that's okay, because I'm going to sweeten the pot.

I know what you're thinking. A free book? Surely Ronan is just going to pawn off his unpublished dreck on us while hording his good stuff.

For the next 30 days I'll give you the solo project of your choosing. (Sorry, this offer does not apply to the books I'm co-authoring.)

This is a great deal for anybody wanting to give my paranormal series a try. Or, if you read and enjoyed books 1-3 (all ghost stories) but are unsure of book 4 (NOT a ghost story), you just sign up and try The Hysteria for free.

As any regular follower of this blog knows, I'm hard at work on a number of projects, with more books in my paranormal thriller series coming out later this year and also standalones due out. So even if you've already churned through The Unearthed books, it's still worth signing up for the Mailing List because more new releases are on the way, and you can redeem your freebie on one of those.
Posted by Evan Ronan at 6:33 PM 3 comments: