If You're A Parent Read This ... Or Don't Read This

TL;DR … Go buy The Chain by Adrian McKinty. It's the best thriller I've read in years.

… About ten years ago, my wife looked up from the used hardback she was reading and smiled. "You'd like this. You should read it."

"It's a crime novel by this guy from Northern Ireland. It's really good. You should read it."

My perpetually failing eyesight was in the grips of that ceaseless entropy. Meaning, I squinted my eyes and took in the cover. There was a gun, an ashtray, a cigarette, an arm of presumably a man. The title was small but the font looked serious.

As it turns out, I loved the book because Dead I Well May Be is a f***ing masterpiece. Darkly humorous, brooding, thoughtful, intense, it's one of those rare books that was both plot- and character-driven. I had a new favorite, and contemporary, author: Adrian McKinty. I absorbed it in a couple days, then moved on to the two sequels. Inside of two weeks (I'm a glacially slow reader, so that's fast for me), I'd inhaled this troika of crime novels starring Michael Forsyte, the Renaissance man's anti-hero/protagonist.

And that's what I did. Over the years, I've probably read DIWMB five or six times cover-to-cover. It's also one I'll "just open" when I can't decide what new book I want to try, stopping at a random passage and reading for a few minutes before bed. It's like comfort prose.

I'm not one for recommending books, either. Reading a novel is quite a time commitment, especially if you're slow like me. Tastes in movies are broader, I feel, while tastes in books are much more nuanced. I don't mind suggesting somebody check out the latest Marvel flick, because hey, it's only two hours and most people will find something to like about it, but no effing way will I recommend novels or authors lightly.

These I do. McKinty's fictional world is one of violence, metaphor, existential philosophy, and a morbid wit. His prose is terse, crisp, lyrical, and intense. It's like being punched by poetry.

I came across DIWMB and McKinty not long after I had started taking this writing thing seriously. I hadn't yet found my voice (and many would argue I still haven't found it, or my niche, but that's a topic for another blog). To my incredulous joy, I found out that McKinty had a blog where he actually responded thoughtfully to every single comment left. I was soon a regular, and not surprisingly, his books and blog attracted a diverse, interesting crowd of people. Having that kind of down-to-earth access to a quality writer was a dream come true. (McKinty's blog was hacked more than once throughout the years, and so these days the blog is on lock-down. Gone are the early Blogger days where he was safely able to engage with his rabidly loyal audience.)

McKinty moved on from the Michael Forsyte series, published a few standalones, and then began a new series featuring Sean Duffy, a Catholic cop living in 80s Northern Ireland, serving on a police force that is 99% Protestant. Talk about conflict. The Duffy books are wonderful, full of personal touches that you can tell come straight from McKinty's personal history.

McKinty's career, at least from my starry-eyed and admittedly naïve viewpoint, seemed wonderful. He accumulated awards more quickly than I amassed rejections from publishers. Every time I checked his blog, it seemed his latest release or the prior release or the book before that one was short- or long-listed for this, that and the other thing. He was in stores. He knew other big-time writers. There was often talk, or suggestion, of a film possibly getting made. His books were translated into 20 different languages. I thought he had made it.

Turns out, he hadn't. He was REALLY struggling. Though garnering an obscene amount of critical acclaim, McKinty was stuck in mid-list hell, the purgatory that many excellent authors find themselves in, where critics recognize the merit of their work, but where they don't earn a living wage. This same man who had won award after award for his crime fiction, was eventually evicted from his home and had resorted to tending bar and driving for Uber to make ends meet.

What happened next is absolutely amazing and is proof that truth is stranger than fiction. All you have to do right now is Google Adrian McKinty The Chain, and a ton of articles will pop up in the search about what went down. It makes for a Hollywood Ending, almost too good to be true.

Don Winslow, a critically acclaimed and commercially successful author in his right, knew McKinty and sympathized with his situation, having been in the very same place years before. Winslow connected his agent Shane Salerno, who is in the running for Best Literary Agent Ever, with McKinty. By then, though, McKinty had already given up the idea of writing for a living and had planned on going back to work. Salerno, however, pressed him and pressed him and McKinty pitched his idea for a thriller set in America. The rest now is history. The Chain was born.

Fast forward. The Chain is out in stores now. After years of writing excellent books and almost quitting several times, McKinty finally has a bona fide hit on his hands. There is a 7-figure movie deal in the works. I can't tell you how happy I am about this. I consider myself one of the lucky (and far too few) people who was reading him before this, back when he was writing great books that weren't selling like they should have. I occasionally emailed him to see what was up and ask for advice, and he was always quick to respond and very helpful.

So finally, let's talk about The Chain. What's all the hub-bub, bub, you're probably saying. Well, there's a good goddamned reason Jimmy Fallon is talking about it.

The Chain is a high concept, unrelenting thriller that will scare parents and would-be-parents absolutely shitless. The story opens with the kidnapping of a young girl. Her mother is contacted minutes later. She must pay a ransom and then kidnap someone else's child. Only when she does this, and the parents of the child she kidnaps have done the same thing, will she see her daughter again. And thus The Chain grows, more and more people sucked into a nightmare world where they must do the unthinkable to save the life of their own.

The Chain is 350 pages and you don't get to take a breath till around page 200. But it isn't much of a breather, because the second half of the book picks up speed just as quickly as the opening. This is the first novel in years (and one of only a handful) that I've finished in less than a day, and like I've noted several times above, I'm a sllllloooooowwwww reader.

If you've never heard of Adrian McKinty before, consider yourself lucky. He's a gifted writer I'm sure you'll like, The Chain is one of those breakout beach reads everybody will be talking about, and the best part is he's got two fantastic series and a bunch of standalones already out there.
Posted by Evan Ronan at 6:12 PM No comments:

The latest and greatest is available for preorder now: Demons Are D*cks 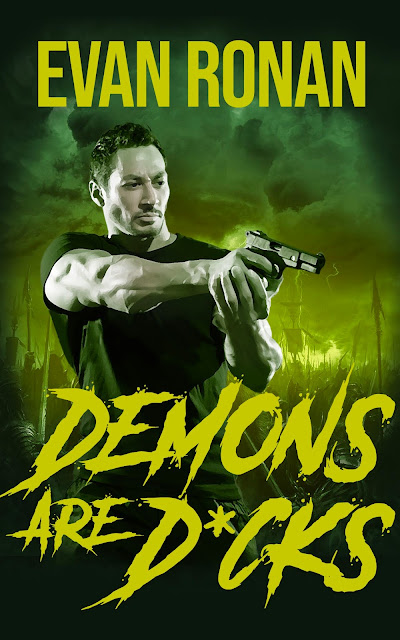