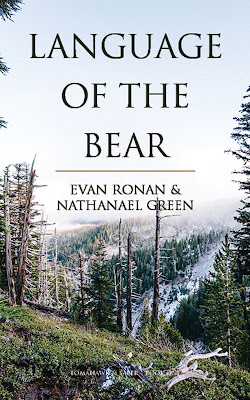 Nate and I have gotten three real good reviews so far on Language of the Bear. Each one does a nice job of giving a good feel for the characters and plot without giving anything away. Two reviewers (without prodding from us, I swear!) were gracious enough to compare the book to its spiritual predecessor, Last of the Mohicans. That's quite a compliment so I want to send a big thank you to our early reviewers so far.

I've made a habit in the past on my solo projects of offering free copies in exchange for honest reviews, a practice that has served both readers and myself well. People are more willing to try out a new author when the book is free, and the subsequent reviews help prospective readers make informed buying decisions.

So now I'd like to extend that offer on Language of the Bear.

If you'd like a free copy in exchange for writing an honest review of the book on Amazon, shoot me an email at ronaniswriting@gmail.com.

This is a limited time offer, however. First ten to email get a free copy. You really have nothing to lose: if historical fiction and old-school adventure are your thing, then this book is right up your alley. It will cost you nothing but a couple minutes of your time once you're finished the book to write up a review.
Posted by Evan Ronan at 4:58 PM 6 comments:

IN THE BLOOD #4 DROPPED
Posted by Evan Ronan at 4:41 PM No comments:

Email ThisBlogThis!Share to TwitterShare to FacebookShare to Pinterest
Labels: action, In The Blood, In The Blood #4, violence, zombie apocalypse, zombies

The Unearthed Passes 50 Reviews on Amazon

I want to take this opportunity to thank all the readers who've left me reviews of The Unearthed on Amazon to date. When I first pushed the book out, I was hoping I'd one day just have fifty readers, never mind reviewers.

The series has come a long way since that day in September, 2014 when I hit publish. Since then I've finished three more books in the series and have the next two planned out. I don't know where the series will go from there. Every time I tell myself, "Okay, that's enough, I'm all out of ideas for Eddie" it isn't long before I'm thinking about him again and that's usually when 2 or 3 more stories come to mind.

I'd love to write a long series about Eddie, kind of in the way MacDonald did for McGee and Child is doing for Reacher right now. Don't know if my frustratingly limited imagination can conjure up enough plots for Eddie and keep him interesting enough to justify an extended series, but we'll see. After all that's part of the fun and challenge.

2015 is not even half over, but I can honestly say it will go down as one of the most interesting, challenging, and fun years ever for me. I'm looking forward to the second half of the year - right now the plan is to release two more Eddie books and also the next two in the historical series I'm writing with my buddy, Nathanael Green. Hopefully I'll put out a few standalones as well.

I'll never forget the first few reviews I got on Amazon. Those brave, early readers decided to give me a shot, and for that I'll be forever grateful.

And no, I can't pronounce that properly.

I mentioned standalones above and it looks like I'll put out a couple middle-grade/YA books this year. Very excited about those, but not expecting a ton of sales. Both are standalones (which don't fare as well as series books) and, kind of like when I released The Unearthed, I'll be happy if I have fifty readers for both.
Posted by Evan Ronan at 3:58 PM No comments:

My Love For The Road Warrior

I've often spoken of my unadulterated (and unapologetic) love for George Miller's cult classic, The Road Warrior. The sequel to his first film, Mad Max, was basically a bigger, better, more outlandish remake of the original, with the director essentially trying to one-up himself in every possible way.

The Road Warrior is one of the best pure action movies ever made. Miller and co. trimmed all the fat off the story: it's basically guns and cars. They borrowed their ideas pretty heavily from westerns here, Rio Bravo (good guys trapped in a small space and possess what the bad guys want) and the spaghetti westerns (man with no name and mysterious past rides into town and ends up saving the day) come to mind. To describe the movie in such easy terms though does it a disservice. It is also: a startlingly still relevant post-apocalyptic tale with an offbeat, quirky sense of humor and dim view of humanity. Everybody thinks of Mel as Max (and he is perfect in the role), but there is no shortage of great characters, or great character moments, in this movie either.

The practical special effects employed here STILL hold up today and in fact look a helluva lot better than almost all of the CGI being used for action flicks these days. But what I admire most about this film is Miller's ever-present why-the-hell-not attitude to filmmaking. It's low budget. It stars nobody. It's genre. It's one long car chase. But it's also extremely well-crafted, shot, and especially edited and the f--king score is brilliant. The opening montage captures the mood of the story perfectly, grim and foreboding and sets the stage for the relentlessness to follow. The film is capped off by wonderful narration as the camera pulls away from Max, the Road Warrior, a character the movie has turned into a mythical hero: enigmatic, scarred, conflicted, but ultimately good...and also badass.

I can't help but get crazy excited about Mad Max: Fury Road. The reviews are off the charts so far.
Posted by Evan Ronan at 4:48 PM No comments:

All Authors Should Be Reading These Reports

See the latest Author Earnings Report here. And if you've got questions for Hugh or Data Guy, ask away - they will answer.

Big thank you to Hugh Howey and Data guy for making this invaluable information available.
Posted by Evan Ronan at 8:05 AM No comments:

LIMITED TIME OFFER - GET THE UNEARTHED FOR $0.99 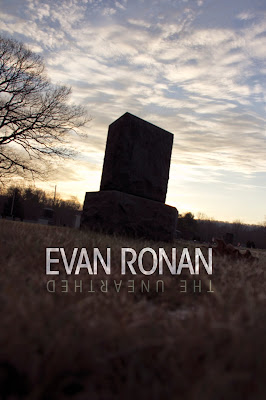 The Unearthed, the first book in my paranormal thriller series, will be available for
$0.99 later today on Amazon. This is a limited time offer (might be over as early as tonight, we shall see) so grab your copy early.
Posted by Evan Ronan at 3:29 AM No comments: 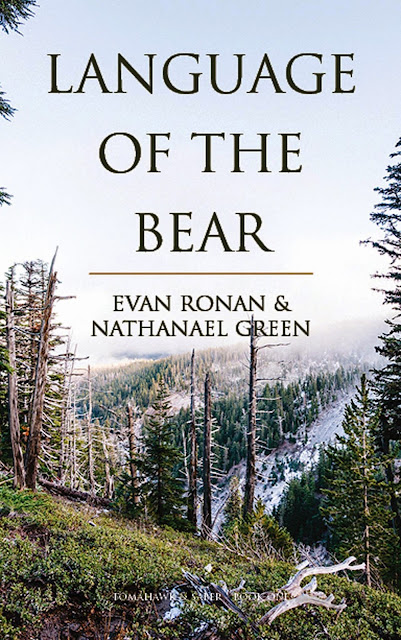 This book is the start of the series Nate and I have planned out set around the time of the French & Indian War. It features not one, but TWO main characters who are brought together by circumstance to undertake a secret, dangerous mission on the frontier of Colonial Pennsylvania.

Fair warning, this book is not for the faint of heart. Murder, betrayal, scalping, hanging, and a blood-soaked finale caps it all off. This is James Fenimore Cooper on steroids.

Check out the free sample over on Amazon, and if you like the book, please leave us a review.

Posted by Evan Ronan at 3:38 AM No comments: 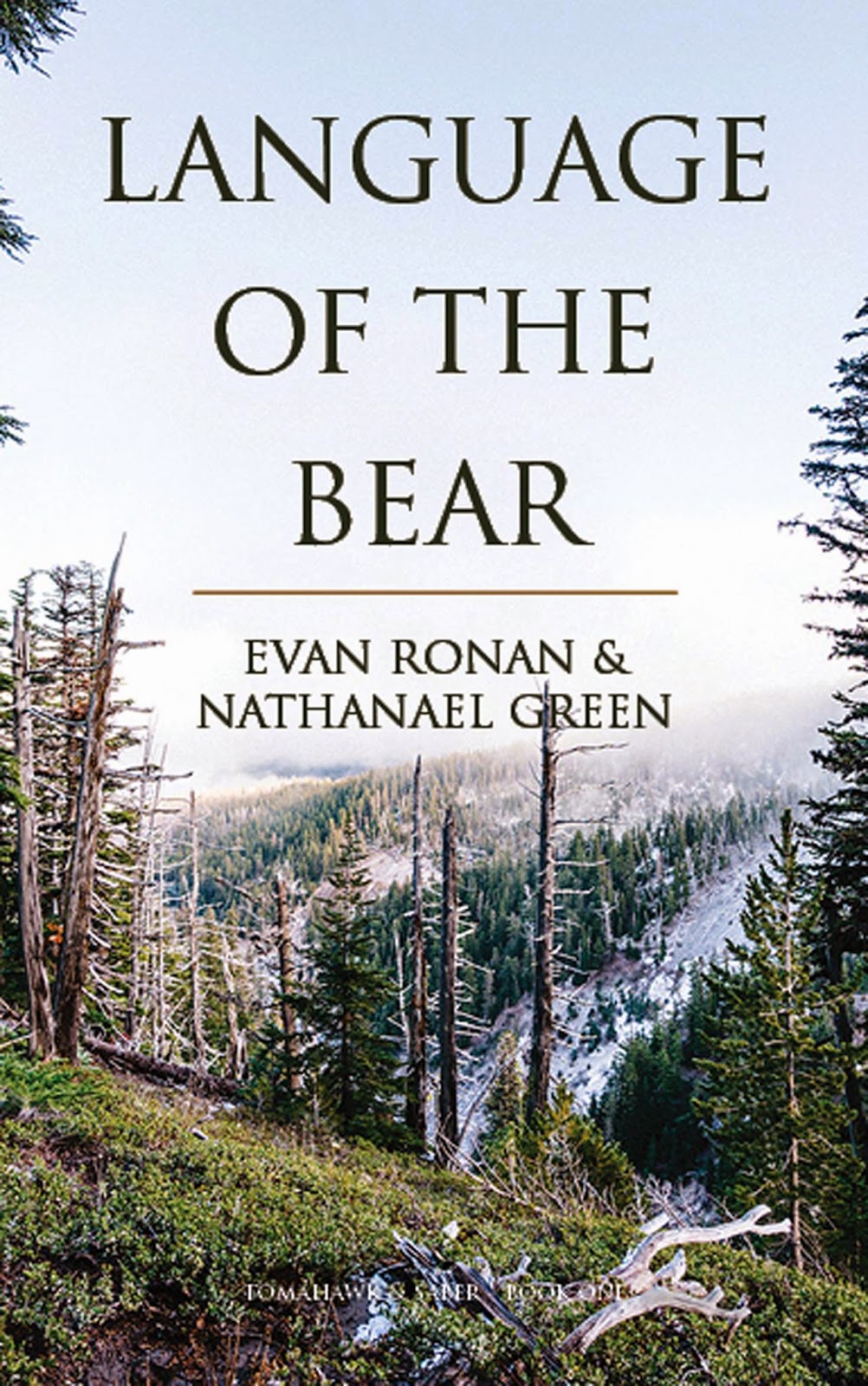 Language of the Bear will be available on Friday, May 8th! And here's the cover art which looks effing great.

All my books are labors of love, and this one is no exception. It's filled with action, danger, suspense, thrills, romance, and some "oh crap" reversals of fortune.

But what makes this book really special to me is I got to write it with one of my best friends, fellow author Nate Green. Collaborating on a story was such an enlightening process--with Nate's feedback I was able to see a few of my many artistic blind spots--and the end product is a perfect example of the whole being greater than the sum of the parts. I could not have written this good a book without Nate.

Look for it May 8th on Amazon. We're hard at work on the sequel, Through the Narrows, and will have that out soon as well.