PREORDER The Dream Machine Now for $0.99 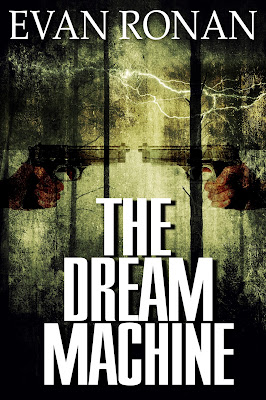 Right now, you can preorder the sixth book in my paranormal mystery series starring everybody's favorite everyman, Eddie McCloskey, for less than a buck!

The preorder discount is over when the book releases, February 1st. I'll also be running some other deals on January 31st in case you're still playing catch-up. More to come on that soon ;-)

I've wanted to write this particular book for many years, but only just got around to it. When the idea first came to me, though, it was a standalone horror novel and did not feature Eddie McCloskey. It was a very different book.

I put that idea aside, tried some other things, got cranking on the Eddie books, did some short fiction, worked on historical novels, and one day had an epiphany, realizing I could take this older idea and turn it into one of Eddie's adventures.

It took me longer than I wanted to write this one for many reasons, most of them good. In 2015, I tried to get some other books (under pen names) out there and worked on collaborative projects with fellow author, Nathanael Green. I spent a lot of time working on shorter, serialized fiction (which has yet to see the light of day!). I decided to rebrand my Eddie books too with new blurbs and covers and some marketing...

Long story short, I tried doing too many different things in 2015 and as a result The Dream Machine kept getting pushed back.

I'm real excited for this book. It takes Eddie in a different direction but stays firmly in paranormal territory. Characters from a previous book return. And I really pushed myself to make this the fastest read in the series. I'm excited to get feedback here.

I'm also hard at work on the seventh book in the series, tentatively titled The Possessed. I'm loving this one too and plan to have much less of a gap between #6 and #7 than there was between #5 and #6.

If you do pick up The Dream Machine, please consider leaving me a review on Amazon! And stay tuned for some upcoming deals!
Posted by Evan Ronan at 2:40 PM 4 comments: