Not too long ago (five months, actually) I blogged about the middle-grade/YA book I was dying to write for my daughters. In my head this story had to be perfect. It was for my girls and it was my way of empowering kids to think for themselves and harness their imagination to do great things. Very quickly, this story had become more than just a story. It had become a statement, it would serve as a lasting testament of my undying and fierce love for my daughters, it had a message and a point.

It had become important.

At the time I had an outline and half a draft and was chugging along. But because the story had gotten so big in my mind, that not-so-little voice of doubt started to poison my thinking. Who was I to write this book? I hadn't done anything like this before. At that point I'd written paranormal thrillers, comedy shorts, and a zombie short story series. The paranormal books were doing okay, but nothing else had taken off. This book, on the other hand, was for a completely different audience in a new genre and it had a message.

Fear crippled me. Fear made me rationalize putting the book aside "until I was a better writer."

After all, the story was important. And I was, by no means, an important writer. No way did I have the chops.

So I put it away.

I worked on other stories and kept putting out new material, but the book for my daughters was never far from my mind. Soon enough, impatience took over.

When would I be good enough to write this book?

Not yet, I told myself, thinking up more excuses, more rationalizations, and more reasons to do something else.

I was in the bookstore a couple months ago, just browsing the YA section for inspiration. Every book I picked up sounded great, all these authors had put out stories with fresh premises and interesting characters and...again, I couldn't write a book like that.

I probably spent two hours in the store that day, wandering the aisles and reading the cover copy on literally dozens of books. I love to see what other authors are doing, not to copy them, but to get inspired to do my own thing.

I left the store with a bunch of books that day and many more ideas for stories, but one thing I noticed was that nobody else had written a book like the one that was floating around in my head.

But I wasn't good enough to write that book.

We've evolved to live by fear. I get why. For probably 98% of our existence as a species we had to worry about our literal survival on a daily basis. Compared to the rest of the animal kingdom, we're slow and not very strong. It's only natural that our evolution would be linked somewhat to fear.

I've lived by fear more than I care to admit. Fear is good when you're lost in a bad neighborhood and it tells you not to go down that dark alley. Fear isn't so good, though, in many other situations. It absolutely sucks when you have a passion to do something that few make a living at.

Fear made me go to graduate school so I could get a good job. You know, the kind of job that would lead to a well-paying career in a respected field. Didn't matter I had no interest in doing that kind of work. I let fear talk me right into doing the "sensible" thing.

Three months into the job, I was miserable.

But fear made me stay for another two years.

It's hard not to live by fear. We're wired to. The safe and the known and the comfortable all conspire to keep us in the status quo. Because it's easier and everything is under control. Right?

Control is a complete and utter illusion. That job you love? It might be gone in six months. Your company could merge with another organization and voila, you're redundant. Your boss, who you got along with so well for many years, could leave and be replaced by somebody that just doesn't like you. The laws governing the work you're doing might change, making your job unnecessary. New technology might be developed that makes your work obsolete.

And on and on.

Said another way, we're at risk no matter what we do so living by fear does not necessarily put us in a better place.

That's a lesson that I have relearn from time to time: living by fear does not insulate us from risk.

And I realized, after that day at the bookstore, that fear was keeping me from writing this book. All the other stories I'd written or were working on, I'd been thinking of those as safe. But like I said, there is no such thing as safe. Paranormal thrillers could fall out of fashion tomorrow and my modest sales on The Unearthed series could take a nosedive. And if that was the case, why the hell not try something new?

So I picked up where I left off on the book for my daughters. 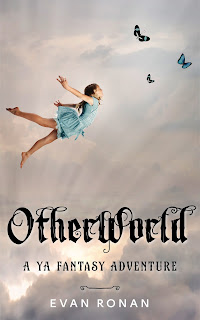 Fast-forward two months and I'm stoked to say I finished it.

OtherWorld is available for PREORDER ON AMAZON right now. I'll continue to polish the manuscript up until the big release, but I can say that I'm really happy with how it turned out. If I had waited another few years so I could grow as a writer, would it have been better? Maybe. Or maybe I would have never written it. I'll never know ;-) Like they say, the best time to do anything is right now, so rather than wait around and see, I just said what the hell and got to writing.

OtherWorld is totally unlike anything else I've done and, since it's YA, there's none of the cynicism that's usually present in my other stuff. It made me feel like a kid again writing it. It was a joy to work on. And to think, fear had almost robbed me of that experience.

To be clear, I'm not saying I'm a courageous person for having written a book. There are many braver acts in this world and much more important things people do. The wider point is: we let fear infect our lives, sometimes without even realizing it. I'd done that with this book. Fear has a way of disguising itself and pretending to be your friend. Fear put on a smile and told me to wait, wait to write this one, wait till you're better, just wait...

Will readers like the book? I have no idea. I've talked before about how authors are the worst judges of their own work. What I think is my strong suit (dialogue), some readers have pointed to as my weakness.

I'm okay with not knowing what to expect in terms of sales for two reasons. First, I stopped letting fear get in the way and just wrote the d***ed book. Some might not see that as a victory, but to me that's a win. Because next time I stretch myself to write outside my usual genres, it'll be a little easier. And second, we always live with uncertainty whether we realize it or not. Living by fear doesn't protect you from risk, it only gives you an inflated sense of security. Like the man says, if you're not failing, you're not trying. I'll be okay with failing here.

OtherWorld will be released on August 14th.
Posted by Evan Ronan at 6:52 PM